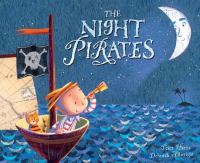 Despite the fact that he is "only a boy," Tom convinces the band of rough, tough, little girl pirates who have come to steal the front of his house to let him join in their adventures.