The Penderwicks [a summer tale of four sisters, two rabbits, and a very interesting boy] 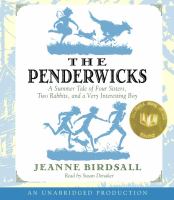 While vacationing with their widowed father in the Berkshire Mountains, four lovable sisters, ages four through twelve, share adventures with a local boy, much to the dismay of his snobbish mother.