SpongeBob goes to the doctor 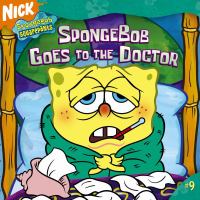 When Spongebob develops a case of the suds, he must overcome his fear of going to the doctor.