"L" is for lawless 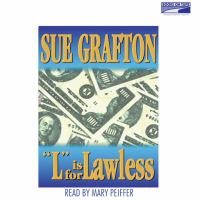 PI Kinsey Millhone of California goes looking for the loot of a $500,000 robbery, an assignment filled with danger as one of the robbers is a psychopath. By the author of "K" Is for Killer.