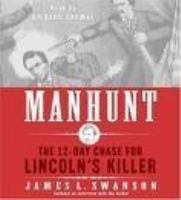 Dramatically portraying John Wilkes Booth's brutal crime and pulse-pounding escape, Swanson takes listeners on the unrelenting chase for the killer. Having sacrificed his wealth and theatrical legacy for a single bullet, the frantic Booth flees from D.C.'s streets, through Maryland's marshes, and into Virginia's woodlands. Trying to soothe the stunned nation, federal and local authorities launch a manhunt to capture Lincoln's elusive murderer. At the forefront of this pursuit are celebrated Civil War hero Colonel Everton Conger and his New York Cavalry. But on day 12 of this bizarre hunt, what really happens?