You wouldn't want to be in Alexander the Great's army! : miles you'd rather not march 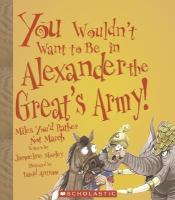