The boy who saved Cleveland : based on a true story 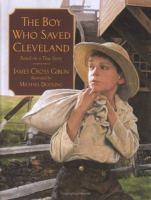 During a malaria epidemic in late eighteenth-century Cleveland, Ohio, ten-year-old Seth Doan surprises his family, his neighbors, and himself by having the strength to carry and grind enough corn to feed everyone.