The Fuchsia is now 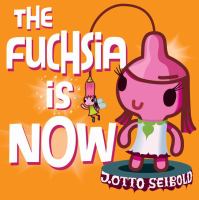 Book
After making a birthday wish, Fushcia is able to conjure a fairy by blinking and saying "the fuschia is now."