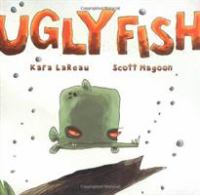 Book
At first Ugly Fish likes being alone in his tank so much that he eats any fish that tries to share it, but when he becomes lonely, he devises a better plan.