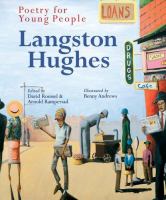 Book
A brief profile of African American poet Langston Hughes accompanies some of his better known poems for children.