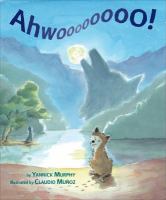 Book
After making several unsuccessful attempts to mimic the sounds of other animals, Little Wolf goes to his grandfather and learns how to howl.