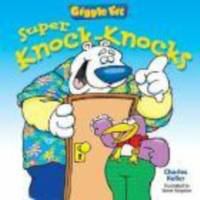 Book
An illustrated introduction to knock-knock jokes, grouped by the letter of the alphabet featured in each.