Ghosthunters and the incredibly revolting ghost! 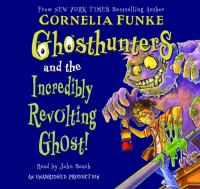 Nine-year-old Tom Tomsky finds he has to face down not just the ASG (Averagely Spooky Ghost) in the basement but the IRG (Incredibly Revolting Ghost) in town. Lucky for Tom, his grandma's best friend just happens to be the world's foremost ghosthunter.