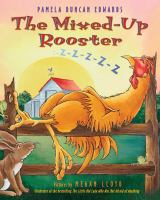 Ned the rooster is fired from his job because he cannot wake up in the morning, but he restores his reputation after discovering his usefulness as a night bird.