Dick Whittington and his cat 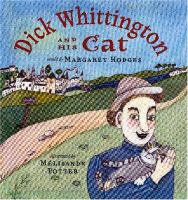 Retells the legend of the poor boy in medieval England who trades his beloved cat for a fortune in gold and jewels and eventually becomes Lord Mayor of London.