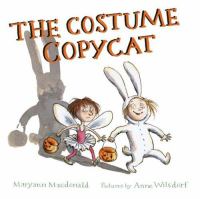 Book
Every year Angela's older sister outshines her at Halloween, until one year Angela creates her own special costume.