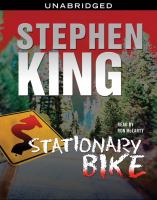 When commercial artist Richard Sifkitz, alarmed by his high cholesterol level, buys a stationary bike and paints a scenic wall mural on the wall opposite it, the bike transports him to places he has no intention of going to.