Once upon a summer 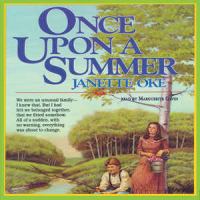 Twelve-year-old Joshua is an orphan who lives in an unusual family where his eighteen-year-old aunt also acts as his mother.