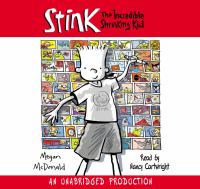 The shortest kid in the second grade, James Moody, also known as Stink, learns all about the shortest president of the United States, James Madison, when they celebrate Presidents' Day at school.