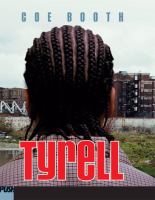 Book
Fifteen-year-old Tyrell, who is living in a Bronx homeless shelter with his spaced-out mother and his younger brother, tries to avoid temptation so he does not end up in jail like his father.