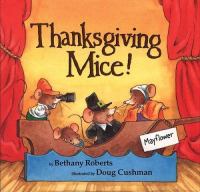 Book
A group of mice run into a few problems when they put on a play to commemorate the first Thanksgiving.