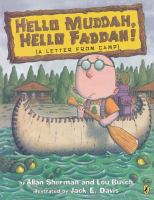 Book
An illustrated version of the comical song in which a young summer camper describes all the horrors of Camp Granada and begs his parents to let him come home after only one day.