What if you met a knight 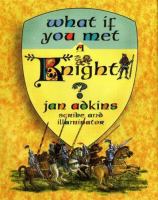 "Forget jousts and quests and dragons, a real knight had real work to do, lots of mouths to feed, and trouble could ride over the hill at any moment. Castles were dark, armor was uncomfortable, and jousts and tournaments (not to mention real battles) were dangerous, and expensive."--Barnes & Noble.