The story of salt 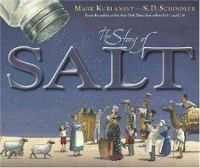 Book
The story of the only rock we eat, including its origin, the other discoveries made because of it, and tales of salt and the people who have been involved with it through the ages.