Moses : when Harriet Tubman led her people to freedom 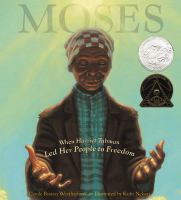 Describes Tubman's spiritual journey as she hears the voice of God guiding her north to freedom on that very first trip to escape the brutal practice of forced servitude. Tubman would make nineteen subsequent trips back south, never being caught, but none as profound as this first one.