Mama, I'll give you the World 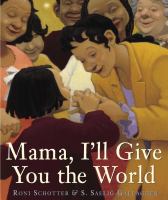 Book
At Walter's World of Beauty, Luisa's secret plans are underway to create a very special birthday celebration for her hard-working, single mother who is employed there as a stylist. For one magical night, Luisa wants to make her single mother's worries disappear. Every day after school Luisa goes to Walter's World of Beauty to watch her mama work-- cutting, coloring, and curling customer's hair, transforming them into the images of their dreams. Mama works hard and hardly ever smiles, but when she does, she is the prettiest flower in all the World. At the end of each day, she puts her tip money in a special envelopes for Luisa-- the envelope marked "college." She wants to give her daughter the world-- but Luisa has plans of her own. It's Mama's birthday and, for one night, she wants to make Mama smile... the way she smiles in an old photograph of her dancing at a place called Roseland. So Luisa transforms Walter's World of Beauty into Roseland, by decorating it with roses and collages of Mama's customers, who are also in on Luisa's secret. And it isn't long before everyone is happily dancing, especially Mama, who is the happiest of all.