A spot of bother 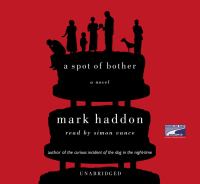 George Hall is an unobtrusive man. A little distant, perhaps, a little cautious, not quite at ease with the emotional demands of fatherhood or of manly bonhomie. "The secret of contentment, George felt, lay in ignoring many things completely." Some things in life can't be ignored, however: his tempestuous daughter Katie's deeply inappropriate boyfriend Ray, for instance, or the sudden appearance of a red circular rash on his hip.