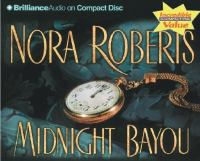 Declan Fitzgerald has been obsessed with Manet Hall ever since he first saw it, but even he couldn't understand his impulse to buy a dilapidated mansion on the outskirts of New Orleans. As he renovates it room by room he starts seeing visions and feeling terrible grief and terror, someone else's. Only Angelina Simone distracts him from the mystery, and she has her own surprising connections to the Hall.