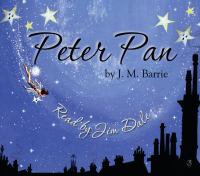 The adventures of the three Darling children in Never-Never Land with Peter Pan, the boy who would not grow up.