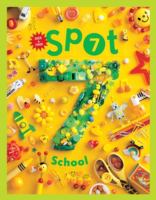 Book
The pairs of photos in this book of picture riddles look the same-- but look carefully. There are seven differences.