P is for pilgrim : a Thanksgiving alphabet 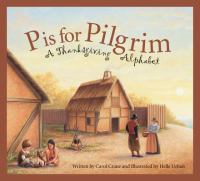 Book
Examines the history and lore of Thanksgiving from A for "across the Atlantic Ocean" to Z for the "zeppelin-like" balloons in the Macy's Thanksgiving Day Parade.