You wouldn't want to be a 19th-century coal miner in England! : a dangerous job you'd rather not have 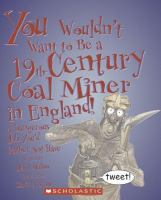