You wouldn't want to be an 18th-century convict! : a trip to Australia you'd rather not take 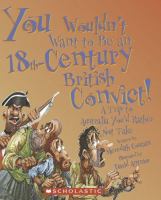 Book
A humorous account of how a British thief would have been punished in the eighteenth century by being sent to Australia in 1785.