You wouldn't want to sail in the Spanish Armada! 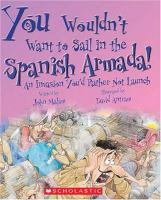 Book
A humorous account of the Spanish Armada and what it was like to be a sailor in this ill-fated fleet in 1588.