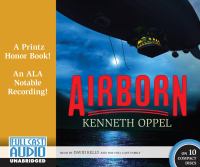 Matt Cruse has the life he has always dreamed of as a cabin boy on the Aurora, a luxury passenger airship that sails hundreds of feet above the ocean. Then one night he meets a dying balloonist who speaks of beautiful creatures drifting through the skies who are completely real and utterly mysterious.