The audacity of hope [thoughts on reclaiming the American dream]

Obama, Barack., Read by the author., 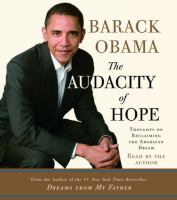 The junior senator from Illinois discusses how to transform U.S. politics, calling for a return to America's original ideals and revealing how they can address such issues as globalization and the function of religion in public life.