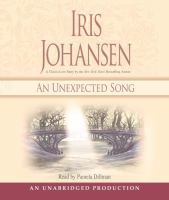 Daisy Justine had no idea that she was auditioning for her life. From the moment he heard her sing, Jason Hayes, the reclusive genius and composer, knew he'd found the star he'd been searching for his whole life. Jason tries to persuade Daisy to return Broadway with him but she has made a promise to another man that she couldn't break. The closer Jason gets to her the closer danger comes. There's more than artistic temperament behind his legendary seclusion.