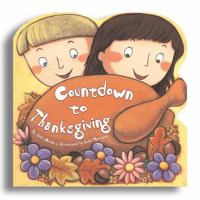 Book
A family's Thanksgiving festivities are described using the numbers from ten to one.