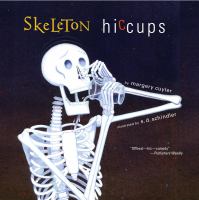 Ghost tries to help Skeleton get rid of the hiccups. Skeleton wakes up with the hiccups. His friend, Ghost, suggests several ways Skeleton should try to get rid of them--holding his breath, drinking water upside down, pressing his fingers over his eyeballs. But nothing works. Finally Ghost has an idea--and he scares those hiccups right out of Skeleton. Full-color illustrations.