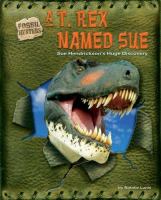 Book
Travel along with Sue Hendrickson as she uncovers the remains of a huge dinosaur.