For one more day 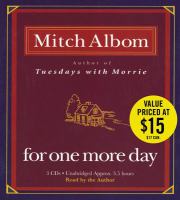 What if you could spend one more day with a lost loved one? Charley Benetto chose to live with his father when his parents divorced. He returns to his hometown decades later when his life is falling apart and finds his mother, who died eight years earlier still living there.