Redwall Book one : The wall 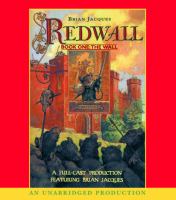 When the peaceful life of ancient Redwall Abbey is shattered by the arrival of the evil rat Cluny and his villainous hordes, Matthias, a young mouse, determines to find the legendary sword of Martin the Warrior which, he is convinced, will help Redwall's inhabitants destroy the enemy.