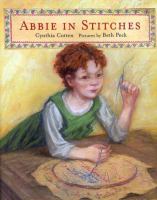 Growing up in western New York State in the early 1800s, Abbie would much rather read than embroider a sampler, which her mother and teacher insist she do, but she works hard after thinking of just the right picture and saying to include. Contains facts about education in the early nineteenth century.