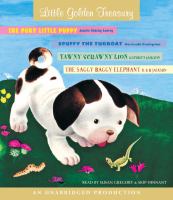 The poky little puppy: One night, a puppy, who is always late coming home, finds there is no dessert for him.
Scuffy the tugboat: Meant for "bigger things", Scuffy the tugboat sets off on a daring adventure to explore the world but realizes that home is where he'd rather be, sailing in his bathtub.
Tawny scrawny lion: Once there was a tawny scrawny lion that was always hungery, until he met 10 little rabbits who taught him how to eat carrot stew--instead of them!
The Saggy Babby Elephant: After a parrot makes fun of Sooki's big ears, long nose, and wrinkled skin, the "saggy baggy" elephant isn't too sure of himself, until he meets some beautiful creatures that look and dance just like him.