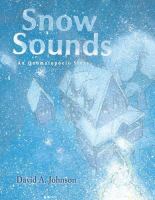 Book
A nearly-wordless book in which a young boy, eager to reach a much-anticipated holiday party on time, listens to the sounds of the shovels, snow plow, and other equipment used to clear his way.