O'Reilly, Bill., Read by the author., 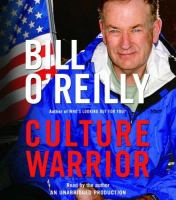 Examines the cultural war in America between those who embrace traditional values and those who want to transform America into a "secular-progressive" nation, discussing such topics as the media, the War on Terror, religion, and self-interest.