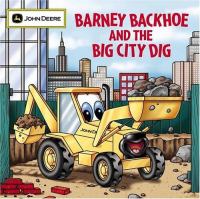 Book
"Barney Backhoe has a big job to do. 'I'm going to the city to help build a skyscraper!' he says. Barney hurries off to the city, but he stops along the way to help fix three really big problems. Before he knows it, he's late for work! But when he gets to the big dig, he finds out that good deeds often lead to very good surprises!"--Cover back.