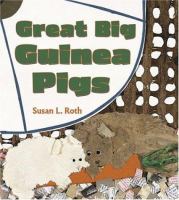 A guinea pig tells her child the true story of giant guinea pigs that lived in Venezuela about eight million years ago.