An apple for Harriet Tubman 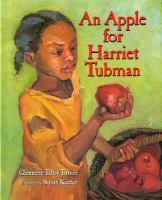 Book
Biography of a little slave girl whipped for eating an apple, who later grew up to become a famous "conductor" for the underground railroad.