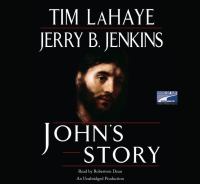 Ninety year old John is the last of the original twelve apostles still alive. While spreading the word of Jesus Christ he's called upon by God to write a gospel about the Son of God.